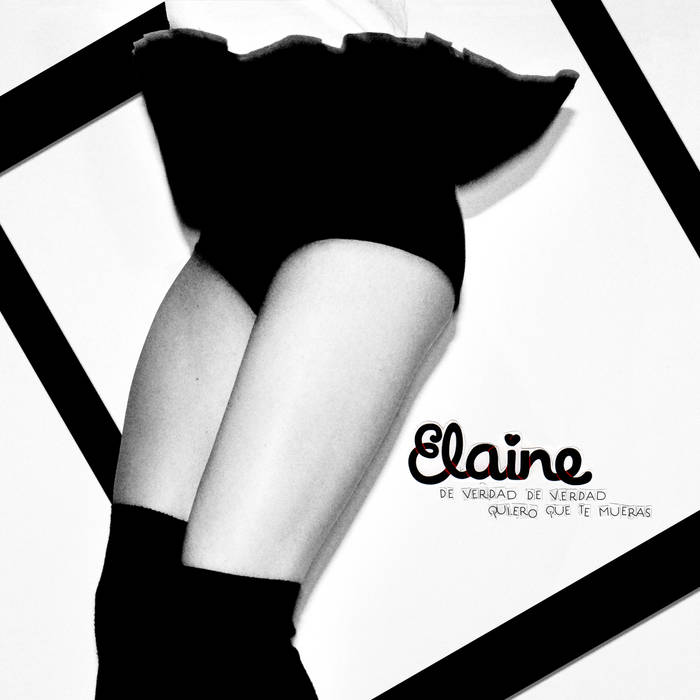 Venezuelan trio Elaine finally deliver their debut album, "De verdad, de verdad quiero que te mueras", and one thing's for sure: This album will make you both mosh and dance.

The songs are built in the key of punk rock, but they feed from different styles, like indie rock, surf/rockabilly, hardcore, Latin music, ska, and many more. You won't get bored, I promise. Recorded live almost in its entirety, "De verdad..." takes you to an Elaine show, with a sonic palette enhanced by audio effects and diginoise. The album gives you little time to breath, so the adrenalin remains on its peak for almost 30 minutes.

"De verdad..." is filled with angry, sexy and pessimistic lyrics, raging screams, poppy harmonies, inside jokes and the occasional animal noises. You may or may not already know the killer combo of "Yes Louis", "Over it (not)" and "Like it naked", featured on the "Desnuditos" EP (The Poni Republic, 2009), which showcased perfectly the essence of the band, and remain the best songs on this record.

"Verushka" is a dark wave-ish tune with a little joke via Korn. With a Batman theme-like intro, "Horrorpunk" mocks the whole vampiresque pose, or maybe a specific someone. "Take it away" is the slowest number on the album, and is as anthemic as any song by Against Me!, for example. And there are 4 (almost) instrumental pieces, completely welcomed. Sleater-Kinney, NOFX, Ramones, Yeah Yeah Yeahs, Pretty Girls Make Graves, Siouxsie And The Banshees... You can taste them all blended in these 12 songs, but with a twist.

Sadly, Elaine called it quits earlier this year. Luckily, we have this release to remember their fun existence.

recorded live with some overdubs!

Track Name: Verushka
Charles was always right
We should be drinking more
No point on staying dead tonight
My shoes are waiting to surprise
My appetite for love
It's all together with the wine

I'm in love
With myself
She and I
Me and her

Puto el suelo que caminas
Puto el día del amor
Puta regla, puto alcohol
Putos todos, puta yo...
Track Name: Over It (Not)
You asked for it, we are done
Is this my turn to hurt you?
Ego is fighting for its own
Playing games with my thoughts

'Cause went to deep to bring it out

And I really, really want you to die

Horrorosa Horror Punk,
Horrorosa
Track Name: Take It Away
Everything goes, as it falls down
Around the shapeless heart
Feelings of love, feelings of hate
Desired for the one we had

I figured this out, this is my shit
And no one should be bothering

Si la vida me da otra oportunidad
Prefiero dejarla para ir a bailar
Porque no dejaré un prejuicio fugaz,
Acabar con las ganas de llegar al final.
No termina mi sed de otro trago a color,
El veneno que sube para hacerme bajar,
"Gracias mademoiselle, wanna go to my place?"
Voulez vous coucher avec moi?
Track Name: Like It Naked
Have a drink or two? maybe a thousand more
Grass up in my head, and looking like a bomb
Baby you know, baby you know
It could be yours, it could be yours

If you want me, you can have me
Show your skin it’s all I'm asking
Baby you know, baby you know
I like it raw, like it so raw
'Cause I...

So if you do it with me,
maybe I can hit the spots
with a kiss and all above
I can do it all along...
Track Name: Rochelle
I will kick your ass, fucking crap
You don't get to mess with me
Scummy bitch, I was raised in the streets
Where the law is blue, but I´m red, so you're dead

If you touch her again I will make you scream for help
With my hands I will break both of your legs
And If you cry, I will make sure your mom gets your eyes with a note saying, saying

Scared yet? well you should.
You should crap right in your pants
‘Cause I'm true, and I have no goods for you
Is the end of a lifetime with a gun instead of balls
And for those, I will bring them, bring them
DOWN! DOWN! DOWN!

Bandcamp Daily  your guide to the world of Bandcamp

Featuring Oakland sounds from the Smart Bomb collective and Samplelov.